How To Add Dimension Lines 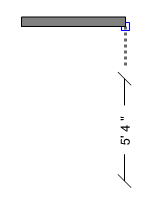 Dimension lines attached to a wall

Watch this short video below to see how to add the dimension lines.

Note: This video has no sound; it has captions pointing out the relevant steps (program version 2.1).

For more information send an email to